Beer is made with four base ingredients, water, malt/grains, hops and yeast. Other ingredients can also be added, such as fruit, juice, honey, and spices.

Use clean water, whatever you feel comfortable drinking. Some people do a whole water chemistry, and change the pH and hardness of their water to better suit the style of beer they are brewing, but to get started tap or spring water is fine. Do not use distilled water because beer and yeast benefit from the minerals present in water. I do add gypsum to my brewing water, it lowers pH, hardens water, and is a proactive clearing agent, but I have not done a full chemistry to know if it’s truly needed. 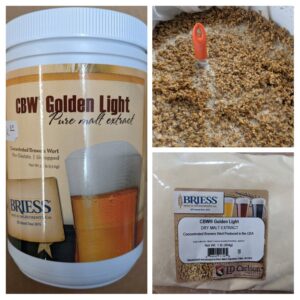 To make alcohol, you need sugar for yeast to eat, and in beer the main source of sugar is from malt extracts or grains. Malt extract comes in DME, dry malt extract, which is powder, and LME, liquid malt extract, which is syrup. These are made by steeping malted barley and condensing it into syrup, or drying it out into powder. Beginner ingredient kits, like Brewer’s Best, have malt extract as the main source of fermentable sugar, and sometimes have grain for steeping. Grain in the kits and in beer in general is a source of sugar, but also to add more depth in flavor, and color. Beer grains are malted barley, wheat, rye, and even oats; they are crushed, then steeped to release the sugar stored in the grain. In all-grain brewing, grains alone are the source of all fermentable sugars.

Other sources of fermentable sugars are corn sugar, beet sugar, flaked oats, barley, rye, corn, rice, and honey, to name a few. These are more easily digested by beer yeast than table sugar. 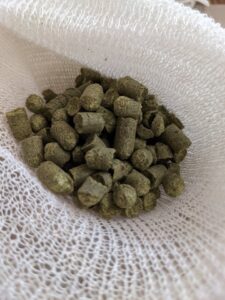 Hops are used to cut through the sweetness of the malt in beer, to add bitterness measured in International Bittering Units, aka IBUs, and add a nice flavor profile. There are many varieties of hops, each containing different flavor notes, such as herbal, piney, citrusy, and floral. Some hops are style specific, like citrus hops being added to IPA’s, and others are more mild or neutral, and can be added in a variety of styles. Hops are added to the boil when brewing beer, usually at different times throughout the boil. The longer a hop is boiled, the more bitter it will be. Generally there is a bittering hop, that is in the boil the whole time, a hop that is added halfway through the boil, which adds some bitterness, but more flavor, and then a hop added near the end of the boil for flavor. Hops can also be added in a whirlpool step, which is a reduced heat after the boil, extracting only flavor, this is popular in New England and Hazy style IPA’s, and hops can be added after the beer has fermented in a dry hop step in secondary fermentation, which also only adds flavor, again popular in IPA’s.

Hops usually come in pellets, which are made from whole hop cones, and have a higher concentration of the alpha and beta acids than when the hops are whole. Generally, you will use at least three ounces of hop pellets per five gallon batch. If you want to use whole hop cones, it’s a 5 to 1 ratio, five ounces of hop cones equals one ounce of pelletized hops. 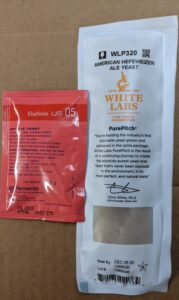 Yeast of course is used to make alcohol, but can also contribute a flavor profile to your beer. There is dry and liquid brewer’s yeast available, each line having style specific yeasts. Most brewer’s yeast gives a clean finish, but if you would like to brew to a specific style, it’s usually the yeast that gives that beer its character. For example, a Hefeweizen is a wheat beer that has a distinct banana or clove flavor profile, that’s due to the yeast, so if you don’t use a Hefeweizen yeast, you’re just going to have a wheat beer. Using dry or liquid yeast is personal preference, I have found success with each. Using liquid yeast usually gives a stronger flavor profile, but it has a much shorter shelf life than dry yeast. Also, be mindful of alcohol tolerance with yeast. Most yeasts can easily go to 7% alcohol, but if you’re brewing Imperial, Belgian, or Barleywine styles, which can reach 10% or more, the neutral brewer’s yeast may not be able to go that high, so you’ll want to get a yeast that can tolerate a higher alcohol percentage. 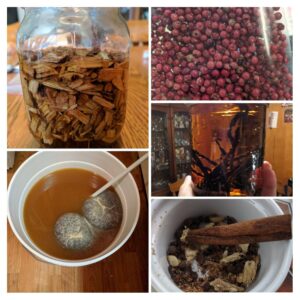 If you’d like to add specific flavors that hops and yeast alone cannot contribute, go for it; brewing beer is fun, and doesn’t have to be confined to the base ingredients listed above! Fruit, purees and juices can be added as a fermentable sugar in the primary ferment, or as a flavor in the secondary, but when you add anything with sugar, it will ferment. There are flavor extracts that don’t have any sugar that can be added at bottling if you don’t want to add any more sugar to your beer. Spices, vanilla beans, or oak can be added in the secondary ferment prior to bottling to impart those flavors, but remember to sanitize anything being added to the beer. For example, I put spices in a hop bag so they aren’t freely floating in the beer, and I spray the bag with Star San, and soak the spices in bourbon, so bacteria and mold aren’t introduced into the beer. I have ruined a whole batch of beer (pictured below) by not sanitizing a bag! 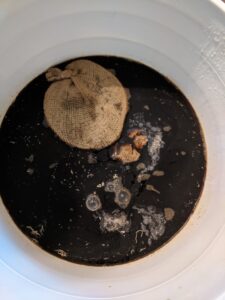 Mold in a batch of stout from not sanitizing the bag….

Stay tuned for part three where we’ll talk about the brewing process!