Recently, I almost found myself in a bit of a sticky situation, quite literally. A few weeks ago, I had brewed an imperial stout kit, and not twenty four hours later, the airlock was happily bubbling away. I didn’t think much of it, except I was glad that the yeast was doing its job. Well, the yeast was doing too good of a job, and beer started to infiltrate the airlock, which gave me flashbacks to a Belgian beer I had brewed months prior. The airlock of the Belgian beer got clogged, which made it so the carbon dioxide was unable to escape, so it blew the lid off my bucket, and I woke up to a mess. There was enough of a carbon dioxide cloud, and krausen (the “gunk” on top of fermenting ales), the Belgian beer didn’t get contaminated with any airborne bacteria. Thankfully with the imperial stout, I caught the clogging airlock in time, and was able to remedy the situation by replacing the airlock with a blow-off tube. 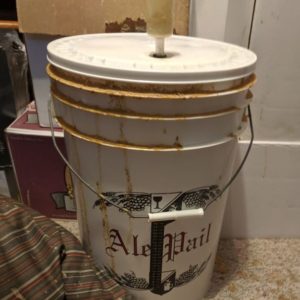 When To Use a Blow-Off Tube
A blow-off tube isn’t necessary in all brews, but I would recommend one when fermenting something with a high starting gravity, or when your fermenter is too full. Belgian beers, barley wines, or brandies are great examples of higher gravity products that may need a blow-off tube. Unfortunately I had been out of practice brewing higher gravity beers when I had my Belgian beer mishap. As for having a fermenter that is too full, I recall the time I made a coffee wine. This was probably four years ago, before two gallon buckets were available, I wanted to make a one gallon batch of the coffee wine recipe from the Winemaker’s Recipe Handbook. Because I didn’t have a bucket, which is what I use as my primary fermenter for everything, I started the coffee wine in a one gallon glass jug, leaving little room at the top, and had a plastic cap with an airlock to seal it. The base of the wine is honey, so the starting gravity was high, and I used Lalvin EC-1118 yeast, which is a beast, so the fermentation took off quickly, and hard. At the time I knew nothing of blow-off tubes, but wish I had because I had a mess from how vigorous the fermentation was.

Coffee Wine, after racking into secondary 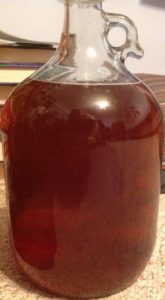 What is a Blow-Off Tube?
A blow-off tube is very simple. It’s replacing your airlock with a hose, like your siphon hose. You put one end in the grommet of a bucket, or rubber stopper/carboy cap of a jug/carboy and have the other end go into another jug/bucket with clean/sanitizer/cleanser water. This makes it so a vigorous fermentation or fermentation too close to the top of the fermenter won’t clog an airlock, blocking off carbon dioxide release. The other container of water is very important because, like an airlock, it is making it so you can hear and see that carbon dioxide is still being released (fermentation is happening), and bacteria/mold/bugs aren’t getting into your fermenter, contaminating your batch. From my experience, the blow-off water can get pretty gunky from beer/wine traveling through the hose into the water, so I would use a sanitizer or cleanser solution so mold won’t grow in the water. Also, I found that taping around the hose where it enters the bucket or stopper, guarantees bugs aren’t getting in and more importantly, the carbon dioxide isn’t seeping out around the hose. It isn’t the end of the world if you don’t tape the hose and carbon dioxide is seeping out, but I like the majority of it to go through the hose, and into the water, mainly because it’s a signifier of fermentation, and lets me know when it’s time to check my brew. 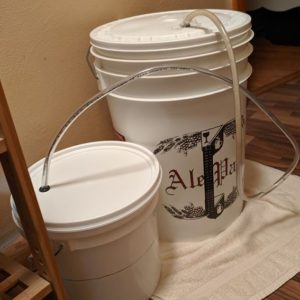 If you aren’t sure how a ferment is going to go, fear you might have an explosive ferment, or it’s too close to the top, use a blow-off tube. It will save you from having to clean up the mess of a lid or stopper blowing across the room, and keep your brew safe from possible contaminants if it blows up without your knowing.